The PIE makes it easy to collaborate and share eiConsole. Interfaces templates and components. Follow the eiConsole Assembly and configure interfaces with no coding or scripting. Then using the PIE Wizard publish and share them on the PIE in just minutes. Charge a fee or make them available for free. Everything you need is provided.

The PIE (PilotFish Interface Exchange) is an online marketplace that enables any entity to easily and rapidly share interfaces, templates, and interface components that were developed using the PilotFish eiConsole IDE. The PIE encourages collaboration between members of an industry ecosystem. Users can leverage PIE interface templates to make "tweaks" particular to their business without having to reinvent what is common and can be shared throughout their industry.

Who it is for

Any user of the eiConsole IDE with web connectivity can take advantage of the PIE. The PIE makes integration with all parties within an industry ecosystem an order of magnitude faster and easier. Companies, standards organizations, government agencies, brokers/distributors, payers/carriers, independent developers, providers of integration services, solution and third party providers, and others can all realize enormous value from sharing, distributing and publishing on the PIE.

Any user of the eiConsole can participate in the PIE, but only licensed users can upload, share and sell their offerings on the PIE.

The diagram example (right) shows how members of an industry Ecosystem can participate in the PIE. Click on the graphic for details on how each entity within the Ecosystem can use and benefit from the PIE. 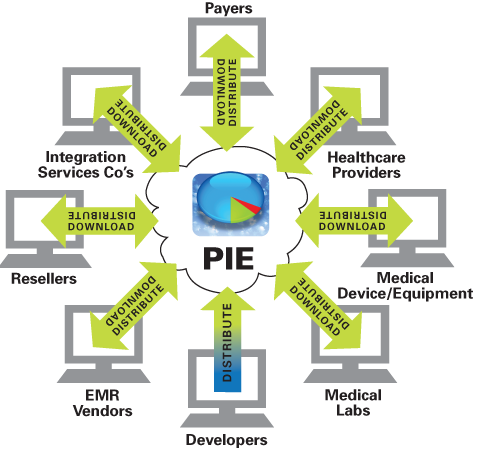 The PIE builds on several prior PilotFish products. These products include the eiPlatform (the Java runtime), the eiConsole (the graphical IDE), and the Validation Server (an automated Validation and Certification component).

With the PIE, licensees of the eiConsole can "share" these interface configuration files with anyone that they choose. “Sharing” includes either offering them for free or charging a license fee. This "share" capability is built right into the latest release of the eiConsole which is made easier by an intuitive Wizard. Users can choose to share the interfaces privately with individuals, a select group or make it publicly available on the Web. They can add any attachments (brochures, videos, sample data, demos, documentation and more), and with a click the interface is immediately uploaded and published to the PIE. A user can access interfaces published on the PIE in several different ways: free license interfaces can be downloaded directly from the PIE and are immediately available for use in their eiConsole window, shared interfaces are sent directly to the eiConsole user over the web, and for licensed interfaces the publisher needs to be contacted for access.

Once an interface is downloaded from the PIE it appears in the PIE in-box within the eiConsole. Once accepted, it behaves just like any other interface that the eiConsole user has configured themselves. After making "Tweaks" and copying it to their eiPlatform, with a mouse click they can promote it to production or upload and share or distribute it on the PIE again. What previously took weeks, months, even years, can be accomplished in a fraction of the time. With the PIE, users can now can simply "Tweak and Go". 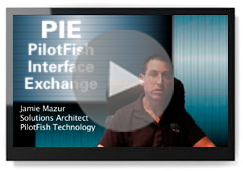 To Publish to the PIE: